Here we talk about archtop guitars…

Gibson’s ES-150 guitar is generally recognized as the world’s first commercially successful Spanish-style electric guitar. The ES stands for Electric Spanish, and it was designated 150 because it cost $150, along with an EH-150 amplifier and a cable. After its introduction in 1936, it immediately became popular in jazz orchestras of the period. Unlike the usual acoustic guitars utilized in jazz, it was loud enough to take a more prominent position in ensembles. Jazz guitarist Eddie Durham is usually credited with making the first electric guitar solo, but it was ES-150 player Charlie Christian who popularized the jazz guitar as a solo, not just a rhythm, instrument. The ES-150’s top was not carved on the underside, making it unsuitable for acoustic use.

The two-pickup Gibson ES-175 archtop guitar has been in production continuously since 1949.

In 1951, Gibson released the L5CES, an L5 with a single cutaway body and two electric pickups, equally playable as either an acoustic guitar or an electric guitar. This innovation was immediately popular, and while purely acoustic archtop guitars such as the Gibson L-7C remain available to this day, they have become the exception. In 1958, the L5CES was redesigned with humbucking pickups; most, but certainly not all, subsequent archtop guitars conform loosely to the pattern set by this model[citation needed]. The electric archtop was particularly popular with jazz musicians Tal Farlow, Barney Kessel and Johnny Smith. 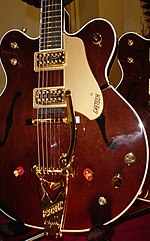 Other manufacturers introduced electric archtop guitars, notable examples including the Gretsch White Falcon and various Chet Atkins models. Some of these instruments have a distinctive “twangy” sound and were taken up by country music and early rock and roll artists such as Duane Eddy and Eddie Cochran. Similar models remain popular in rockabilly.

Gibson’s last innovation in archtop design was the creation, in late 1950s, of “thinline” models with a reduced body depth, notably the Gibson ES-335 and Epiphone Casino.[4] These were more feedback resistant and easier to play standing up. They are classed as semiacoustic guitars, although not all semiacoustic guitars have an arched top. Thinlines became popular with mainstream pop and rock artists during the 1960s. The 335 and similar guitars were taken up by, and remain steadfastly popular with, electric blues players; B B King‘s various “Lucilles” are based on 335s.

In the following the building process of the Oldlady model built for the fantastic guitar player and friend Sebastiano Esposito.

You can find out more about which cookies we are using or switch them off in settings.

This website uses cookies so that we can provide you with the best user experience possible. Cookie information is stored in your browser and performs functions such as recognising you when you return to our website and helping our team to understand which sections of the website you find most interesting and useful.

Strictly Necessary Cookie should be enabled at all times so that we can save your preferences for cookie settings.

If you disable this cookie, we will not be able to save your preferences. This means that every time you visit this website you will need to enable or disable cookies again.